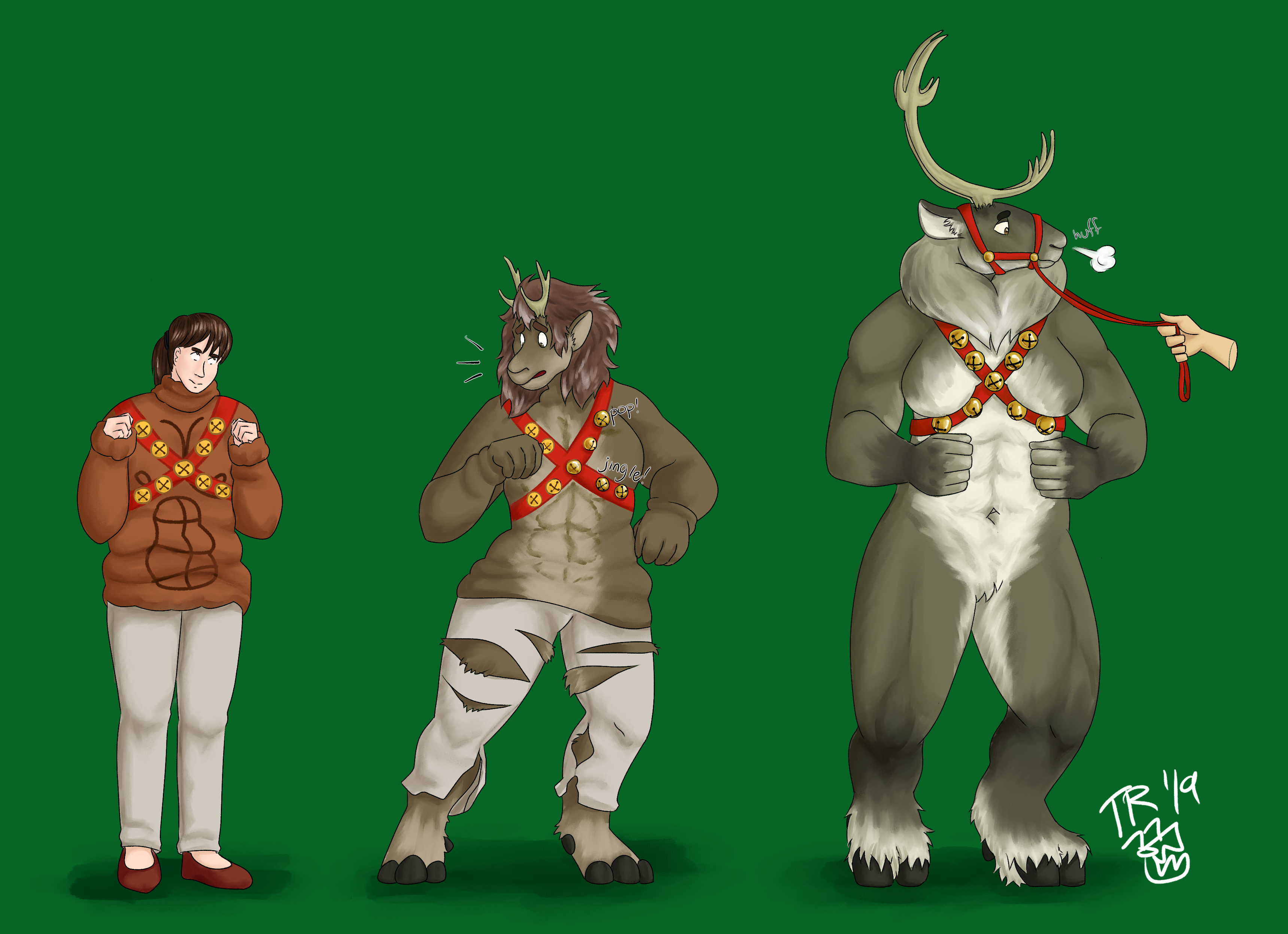 "No, no, I looked it up online, and it's totally true! Males shed their antlers in the winter-- Santa's reindeer are all females!"

Emmy threaded her way through the conference room, packed with the usual crowd for the office Christmas potluck. Her concentration was split between balancing the pile of pasta salad and crock pot meatballs on her thin paper plate, and avoiding the attention of--

Emmy winced as Huan's playful call hit her like a smack between the shoulder blades.

No one in the offices of White Bank Shipping Co. could ever be considered more festive than Huan Greeney. No one's cubicle glittered with more tinsel. No one started listening to Christmas music earlier. And no one else put that silly big red nose and pair of antlers on their car every year.

The theme of this year's gathering had been her idea. Through her suggestions, management had ushered what Emmy had previously only seen in sitcoms and Pinterest posts into horrifying reality-- the Ugly Christmas Sweater Party.

"Where's your sweater?" Huan repeated, turning away from her conversation about reindeer with Mark and Sandra.

"I, um, don't have one," Emmy said awkwardly, staring into her meatballs. "I'm not really a big enough Christmas person to have a sweater--"

"Oh, don't worry, it's okay!" Huan cut in cheerfully. "I actually have a whole bunch, so I brought them with me just in case someone needed one! They're in the little presentation room next door!"

Screaming internally, Emmy turned and started making her way towards the door.

Though she never showed it, she'd always felt a secret, smug pride over her lack of interest in the whole Christmas thing. Her parents had raised her and her brother to value experiences and memories, not things. Their holidays had always been filled with spending time together as a family, not frantically shopping. They never even put up a tree.

But of course, if she didn't give in, Huan would would bother her for the rest of the night about it, in that particularly cheerful, well-meaning way of hers that drove her absolutely batty...

The noise of the party filtered faintly through the wall of the small presentation room next door as Emmy flicked on the light. A large cardboard box heaped with lumpy sweaters sat on the table. Emmy didn't like any kind of sweater, Christmas or not-- they were so restricting, and the wool ones were itchy.

Just for a couple hours, she told herself. Deb's meatballs are worth a little discomfort.

She yanked one from the heavy pile at random and pulled it on over her blouse.

It wasn't that uncomfortable, big and loose enough that she could still move around, and the material was soft. But Emmy still groaned internally as she looked down at herself. The brown sweater's knit pattern picked out the exaggerated muscles of a cartoon strongman's torso, like those dumb t-shirts you saw in resort town gift shops, draped with a red harness of jinglebells. Emmy was going to be spending the rest of this party as one shredded reindeer.

Whatever. At least the bells aren't real.

Emmy turned and stepped towards the door.

Emmy paused in confusion at the little chime. Was it the sweaters behind her settling? Or did the one she was wearing have little bells woven into it out of sight?

She patted her chest...and almost jumped right out of the sweater as she felt movement. She looked down.

The bells in the pattern were...were popping outwards into reality, into actual brassy metal, ringing brightly.

Emmy poked at the growing bells in total bewilderment...and then choked back a scream as she saw her hand.

The sweater was growing, spreading up her wrist and around her fingers. She yanked at it sharply, and then yelped in pain and surprise-- it was like she'd pulled on her own skin. And the material was changing-- where there once had been yarn, now there was soft, gray-brown fur sprouting.

A sharp tingling, pinching sensation at her forehead made her wince. She raised her hand and started to hyperventilate in panic as she felt two small horns pushing their way up from her head.

Her wrists bumped against her face, and she realized in horror that that was changing too, that her skull was growing and elongating, and her ears, her ears were getting bigger too, and sprouting more soft, fluffy fur--

Okay. Okay. I need-- I need to go get help for whatever's happening--

She nearly went sprawling as she tried to run and felt her feet slip out of her shoes. Her bare feet landed on the floor with a loud thunk, and when she looked down, she saw her nails were growing and hardening, spreading out into thick caps over each foot.

The tendons in her feet and ankles creaked and popped as they rearranged over shifting bones, her heels lifting up into digitigrade form. With a series of sharp clicks, her outermost two toes on each foot shifted backwards, until she was standing on x-shaped hooves. Her khakis began to split open along the seams as the muscles in her thighs grew, revealing more fur creeping down her legs. Around her neck, a thick ruff of paler hair was puffing outwards.

Emmy tottered clumsily, and nearly fell again as she was overbalanced by her rapidly growing antlers.

"What thuh fuh-huh-huuuouh!" Her voice became a deep bray as her face finished lengthening out into a long, thick muzzle. She could even feel her teeth moving and flattening out, into a herbivore's flat molars. Her large, fluffy ears twitched in alarm.

Emmy bent over the table as the changes refused to stop. With an explosive tictictictic, the seams of her pants were ripped completely open as her legs lengthened and swelled wide with muscle. Her spine stretched and popped as she grew taller, until her antlers scraped dangerously close to the ceiling.

Her whole body vibrated with a strangely pleasurable tingling heat as the growth swept upwards. A six-pack of abs cut deeply defined lines through the paler fur of her belly. Her biceps bulged outwards and her harness jingled as her shoulders widened. Her back rippled with muscle. Her fear and confusion were totally gone now-- oh, this felt so good...

A loud groan of satisfaction issued from Emmy's throat as her new body finally settled down. Now her physique was perfect for...for...

She blinked and snorted in confusion. For pulling and lifting heavy things, of course! She was a reindeer-- a working animal! So why was she standing in this overheated little office when the snow was falling and there were sleighs out there to get hitched up to?

Emmy turned to see Huan standing in the doorway. She sighed.

"Poor thing...don't you worry, once it's past Christmas it'll come right off. Until then, looks like I'm going to be taking care of you...c'mere, girl!"

Emmy shuffled obediently forward. With a final pop, a harness the same color as the one across her chest sprang into being around her her muzzle. Huan took her reins in hand and an unexpected wave of pleasure, of rightness, washed through her. She lowered her head to nuzzle her new master affectionately.

Emmy sighed and closed her eyes in contentment as Huan scratched her behind the ears.

"Hey," Huan said, perking up a bit. "While you're here, you want to help me move the copier to the new print room? Waste not, want not!" she added, with a little pat to the reindeer's strong arm.

Emmy nodded eagerly, snorting in excitement. Yes, she wanted to be a good girl and go to work!

The bells on her harness jingled merrily as Huan led her by the reins down the hall.